back to the main page 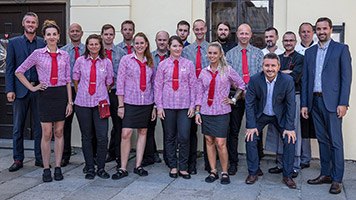 In the Masné krámy restaurant team of chefs, waiters and waitresses work under the guidance of head chef Luděk Hauser and experienced operations managers František Sýkora and Miloš Novotný. All is closely supervised by the head of Gastro Dept. in Budějovický Budvar, n.p., Tomáš Olejník. 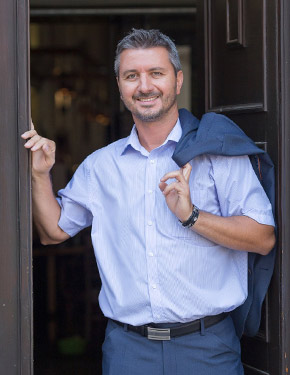 Manager of the restaurant

After finishing his studies in Austria, he worked in the Austrian Alps for several seasons. At that time he took part in carrying out a royal wedding for 450 guests in the town of Seefeld, where a daughter of the crystal jewellery producer Swarovski married a member of the Spanish Royal family. He acquired further experience when preparing receptions and in catering in the German hotel of Kempinski Airport Munich. At the turn of the millennium, he opened the newly reconstructed Kongress & Theaterhaus in Austrian Bad Ischl as the restaurant’s manager. Additionally, he also prepared the opening of the newly reconstructed hotel of Crowne Plaza (a part of the Intercontinental Hotels Group) in Bratrislava. He favours the real Czech cuisine as well as light Italian cuisine. He like doing sports (tennis, golf and ice-hockey) and spending time with his family. 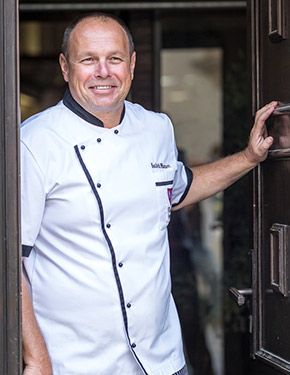 Head chef of the reastaraunt

The creative head chef of the Masné krámy restaurant can boast a 14-year long foreign experience in the Bavarian hotel of Bayerischer Hof, which was selected for the Michelin guidebook. He began working in this hotel from scratch, gradually making his way up to the position of assistant head chef where he then worked for several years. His experience was also acquired by helping to prepare so-called “culinary trips” to various destinations worldwide for the guests, which were special thematic evening buffets of various cuisines. During his professional career, he often prepared menus for interesting personalities of the German show business. Furthermore, he also cooked for HRH Bavarian Prince Leopold and prepared a menu for the Czech ex-President Václav Havel, who visited the Masné krámy restaurant in 2008. He likes cooking Czech cuisine as well as venison dishes and specialises in preparing uncommon types of fish and Mediterranean dishes as well. He spends his leisure time fishing, playing golf and being with his family.